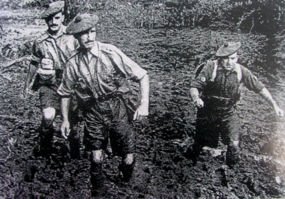 Brigadier Ian McAlister Stewart DSO, MC, DL, OBE of Achnacone Appin, was born in 1895 in Surore, Poona, where his father was medical officer in the Poona Horse. The family returned to Achnacone in 1895. Brigadier Ian Stewart of Achnacone

Brigadier Stewart had a German governess before attending Cheltenham School. He went on to Sandhurst with a prize cadetship and passed out in 1913 as top cadet of the year and also the youngest.

He was commissioned into the Argyll and Sutherland Highlanders in February 1914, when the regiment was at Fort George.

Still displayed on a wall at Achnacone is the small sword issued to Brigadier Stewart at the start of the war. The sword played it’s part in one incident – when leading a charge, he fell. The platoon sergeant, leaning over him, expecting a casualty, said, “poor kid” – to be faced with the response “I only tripped over my sword”.

He was severely wounded in May 1916, becoming fit again in the spring of 1917. He was at once seconded to serve with the Machine Gun Corps, later serving with the Tank Corps.

Brigadier Stewart was posted to the headquarters of the Tank Corps in France as GS03 to the celebrated Col. J.F.C. Fuller, Chief of Staff. He accompanied General Ellis at the Battle of Cambrai, taking part in the first ever tank attack.

During the retreat from Mons he managed to commandeer a train, ordering the driver to head back down the line. He and his men fell asleep and woke up to find they were past the British lines and almost in Paris.

After the war he spent some time on the depot staff at the regimental headquarters at Stirling Castle. There he followed service overseas in the West Indies, Peking, Hong Kong and India. In Peking he was a member of the Legation Guard.

He returned to command the depot at Stirling between 1934 and 38. He made various innovations – among the most popular being hot water and a cup of tea for soldiers after lunch.

In 1940 he was appointed to command the second battalion. He served with great distinction in the short lived Malayan campaign in 1941/42.

On arriving in Malaya, he began to instruct his men in jungle warfare, developing the tactics of encircling the enemy and then driving them up against a road block – a technique much used by the Japanese.

The Argylls were the last troops to cross into Singapore, having first held the causeway for other troops to pass. As they marched across, two pipers played “Wi a Hundred Pipers” and “Highland Laddie”, the battalions march past.

At Girk road a single company of the Argylls under Brigadier Stewart held an entire Japanese regiment at bay for three days.

The late General Mansobu Tsuje, then a young staff colonel with the 25th army later described the bravery and skill of the Argylls, which, he said, was a credit to the reputation of the British Army.

In Singapore, Brigadier Stewart ordered the enrolment of Royal Marines who had survived the sinking of ships off the island – these men inevitably became known as the Plymouth Argylls.

A few days before the fall of Singapore, General Wavell, Supreme Commander in the South West Pacific, ordered Brigadier Stewart to be flown out to report to him in person on the true state of affairs in the Malayan peninsula and about the impossible situation in which the British Army found itself.

Because Brigadier Stewart was flown out early, he was not taken prisoner. But many of his men were and were forced to work on the notorious Burma Railway.

Brigadier Stewart leadership in Malaya in the following terms, “If all units in Malaya had been trained and led with the same foresight and imagination that Brigadier Stewart showed in the training of his Battalion the story of the campaign might have been different. It was the realisation of this that led me to order Brigadier Stewart’s return to India …. to impart his knowledge and ideas to units preparing for the return match with the Japanese”.

Brigadier Stewart was awarded the DSO and became a full colonel in 1942. On his return to the UK he was appointed chief instructor at the School of Infantry at Barnard Castle in County Durham. His last appointment before retiring was as Commander of 144 Infantry Brigade in 1945.

He retired in 1947 at the age of 52, returning to Achnacone. His father had died a short time previously and this influenced the Brigadier’s decision to retire.

He set about building up the estate, and was to become well known in farming circles. He was president of the National Farmers Union, and as recently as the mid 1970’s was still presenting papers on agricultural maters. He tried several experiments on the 2,000 acres of Achnacone, for example in-wintered sheep.

When the Argylls were under threat of the axe in the early 1970’s Brigadier Stewart played an active part in the successful “Save the Argylls” campaign. He even sited a booth at the Ballachulish ferry, asking people to sign the petition.

Brigadier Stewart and his wife, Ursula Morley Fletcher, were active in many charities in Argyll. Mrs Stewart predeceased her husband in 1969.

Brigadier Stewart was a life-long member, former president, and honorary president of the Stewart Society. He will be much missed by that Society.

Mr Douglas Stewart, secretary, described Brigadier Stewart as the “pater familias” of the society. He had a fund of knowledge about the Appin Stewarts, and translated that into always welcoming visitors to Appin. He gave freely of his time and knowledge to the Stewart Society.

Brigadier Stewart was on two occasions chief Steward at the Argyllshire Gathering.

The funeral, held on a clear, sunny day at Portnacroish, was very well attended with many mourners standing outside the church for the service. Officiating were the Rev. David Day, the Very Rev. George Henderson, Bishop of Argyll and the Isles, Provost MacLean, the Rev. Michael Hickford. At the Brigadier’s request, the Rev. Walter Ritchie of the Church of Scotland read the second lesson. The address was given by the Lord MacLean of Duart.

Major Eric Moss piped the coffin from the Church and played a lament at the burial. The Stewart Society’s banner was unfurled by Captain Rennie Stewart, RN.