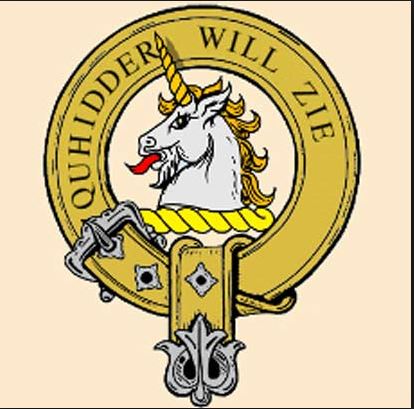 Most of the Stewarts of Appin did not use the surname “Stewart”. The leadership of the Clan was held by the Chief and his many cousins, who were tacksmen who held minor estates in Appin as cadets of the chief. Many of the clansmen were descended from families which had lived in Appin long before the Stewarts arrived, including McColls, Clan MacLea, McQuorquodales and Carmichaels.

In 1497 some of the Clan MacLaren stole cattle from the Braes of Lochaber from the Clan MacDonald of Keppoch. The MacDonalds followed them and overtook them at a place called Glenurchy where a battle took place. The MacDonalds won and recovered their cattle. However the MacLarens then looked for assistance from Dugel Stuart of Appin. Another battle then took place where the MacLarens were now joined by the Stuarts against the MacDonalds. During the battle Dugel, the chief of the Clan Stewart of Appin and the Clan MacDonald of Keppoch chief were both killed.

They served with James Graham, 1st Marquess of Montrose and participated in Battle of Inverlochy (1645) where they defeated Archibald Campbell, 9th Earl of Argyll at Inverlochy Castle in February 1645. After James VII was deposed in 1688, the Stewarts of Appin supported the deposed House of Stuart.

The Stuarts naturally supported the Jacobite Risings and sent men to fight in both the The ‘Fifteen and The ‘Forty Five.

At the Battle of Culloden in 1746, the Stewarts of Appin suffered appalling casualties breaking the ranks of the Government Regiments of Foot of the British Army. Charles Stewart of Ardsheal led the men of Clan Stewart of Appin during the rising of 1745, and many fell at the grim field of Culloden, having first gained glory by breaking the Redcoat ranks. Colin Campbell of Glenure, ‘the Red Fox’, was placed as government factor on the forfeited Stewart estates. His murder in 1752 has been immortalised by Stevenson in the novel, Kidnapped. After the chief suspect, Alan Breck Stewart, made his escape, James Stewart, the half-brother of the chief, was tried by a jury composed entirely of Campbells at Inverary presided over by Argyll himself, and, perhaps not surprisingly, was convicted and hanged.