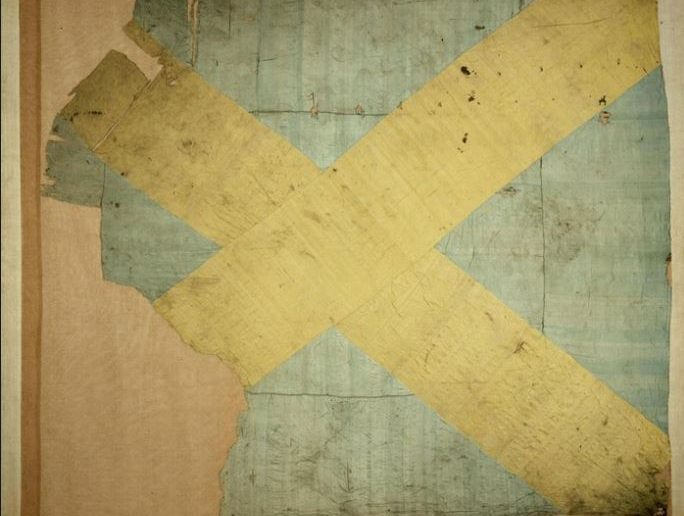 This rare Jacobite banner, or flag, was carried by the Appin Stewart Regiment at the Battle of Culloden, a battle which saw the defeat of Bonnie Prince Charlie and the Jacobite Cause.

According to accounts of the battle, 17 clansmen fell while carrying the colour. Originally, this honour of standard-bearers was bestowed to the Carmichaels of Appin and was passed down through the generations. In the chaos of the Jacobite defeat, eight of the Carmichael bearers were either killed or seriously wounded. The bloodstained flag was ripped from its standard by 18-year-old Donald Livingstone, a soldier of the regiment. He managed to wrap the colours around his body beneath his clothes but was hit by a bullet, almost instantly. Donald grabbed a stray horse and escaped the moor, killing a dragoon, as he did. Smuggling the banner from the field of battle, he made his way back home to Lismore and later gave it to the father of his superior officer, Alexander Stewart of Ballachulish, who had been killed at Culloden.

By rescuing the colours, at great personal risk, Donald Livingstone saved it from the fate of nearly all the other colours of the Jacobite army. The government saw them as symbols of rebellion rather than legitimate trophies of war, and the captured colours were ceremonially burnt at Edinburgh’s Mercat Cross by the public executioner.

Donald lived until the age of 88 and was buried at Lochaline churchyard, Morven, in 1816. He had six sons and two daughters. On his death, it was alleged that he 9 bullet wounds on his body.

The Appin Banner is held at the National Museums Scotland, in Edinburgh.