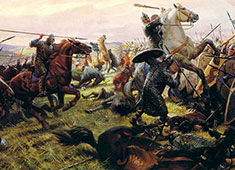 The Battle of the Black Mount 1497

The Battle of Black Mount was a Scottish clan battle that took place in 1497 or 1498, in Black Mount which is between Glen Orchy and Glen Coe in the Scottish Highlands. The battle was fought between the Clan Stewart of Appin and their allies the Clan MacLaren against the Clan MacDonald of Keppoch.

The Clan MacLaren had made a raid into the Braes of Lochaber and carried off cattle belonging to the Clan MacDonald of Keppoch. The MacDonalds followed after them and caught up with them at Glen Orchy, where, after a sharp skirmish they recovered the cattle. The MacLarens then sought the assistance of their allies the Clan Stewart of Appin who were led by Dugald Stewart.

Dugald Stewart instantly raised his men and joined the MacLarens. A battle then took place between the two sides at the Black Mount near the head of Glen Coe. Dugald Stewart, chief of Appin and the chief of the MacDonalds of Keppoch were both killed in the fighting and many were slain on both sides.

Dugald Stewart of Appin was succeeded by his eldest son Duncan who never married. Duncan was therefore succeeded by Dugald’s second son, Alan, who fought at and survived the Battle of Flodden in 1513.