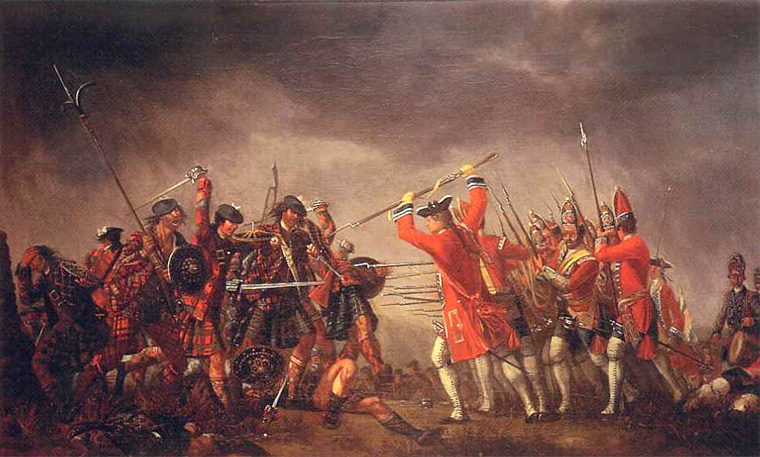 The Battle of Culloden 1746

The Jacobite army was originally arrayed between the corners of Culloden and Culwhiniac parks (from left to right): the three Macdonald battalions; a small one of Chisholms; another small one of Macleans and Maclachlans; Lady Mackintosh and Monaltrie’s regiments; Lord Lovat’s Regiment; Ardsheal’s Appin Stewarts; Lochiel’s Regiment; and three battalions of the Atholl Brigade. Murray who commanded the right wing, however, became aware of the Leanach enclosure that lay ahead of him, a wall that would become an obstacle in the event of a Jacobite advance. Without any consultation, he then moved the brigade down the moor and formed into three columns. It seems probable that Murray intended to shift the axis of the Jacobite advance to a more northerly direction, thus having the right wing clear the Leanach enclosure and possibly taking advantage of the downward slope of the moor to the north.

However, the Duke of Perth seems to have misinterpreted Murray’s actions as only a general advance, and the Macdonalds on the far left simply ignored him. The result was the skewing of the Jacobite front line, with the (left-wing) Macdonalds still rooted on the Culloden Parks wall and the (right-wing) Atholl Brigade halfway down the Culwhiniac Parks wall. In consequence, large gaps immediately appeared in the severely over-stretched Jacobite lines. A shocked Sullivan had no choice but to position the meagre ‘second line’ to fill the gaps. This second line was (left to right): the Irish Picquets; the Duke of Perth’s Regiment; Glenbuchat’s; Lord Kilmarnock’s Footguards; John Roy Stuart’s Regiment; two battalions of Lord Ogilvy’s Regiment; the Royal Écossais; two battalions of Lord Lewis Gordon’s Regiment. Farther back were cavalry units. On the left were: Lord Strathallan’s Horse Bagot’s Hussars and possibly Balmerino’s Lifeguards. On the right were Lord Elcho’s Lifeguards and Fitzjames’s Horse. And in the centre was Charles Edward Stuart’s tiny escort made up of Fitzjames’s Horse and Lifeguards. When Sullivan’s redeployment was completed Perth’s and Glenbuchat’s regiments were standing on the extreme left wing and John Roy Stuart’s was standing beside Ardsheal’s.

Cumberland brought forward the 13th and 62nd to extend his first and second lines. At the same time, two squadrons of Kingston’s Horse were brought forward to cover the right flank. These were then joined by two troops of Cobham’s 10th Dragoons. While this was taking place, Hawley began making his way through the Culwhiniac Parks intending to outflank the Jacobite right wing. Anticipating this, the two battalions of Lord Lewis Gordon’s regiment had lined the wall. However, since the government dragoons stayed out of range, and the Jacobites were partly in dead ground they moved back and formed upon a re-entrant at Culchunaig, facing south and covering the army’s rear. Once Hawley had led the dragoons through the Parks he deployed them in two lines beneath the Jacobite guarded re-entrant. By this time the Jacobites were guarding the re-entrant from above with four battalions of Lord Lewis Gordon’s and Lord Ogilvy’s regiments, and the combined squadron of Fitzjames’s Horse and Elcho’s Lifeguards. Unable to see behind the Jacobites above him, Hawley had his men stand and face the enemy.

Jacobite front line skews and stretches, government forces compensate; others break into and through Culwhiniac enclosure.

Over the next twenty minutes, Cumberland’s superior artillery battered the Jacobite lines, while Charles, moved for safety out of sight of his own forces, waited for the government forces to move. Inexplicably, he left his forces arrayed under government fire for over half an hour. Although the marshy terrain minimized casualties, the morale of the Jacobites began to suffer. Several clan leaders, angry at the lack of action, pressured Charles to issue the order to charge. The Clan Chattan was first of the Jacobite army to receive this order, but an area of boggy ground in front of them forced them to veer right so that they obstructed the following regiments and the attack was pushed towards the wall. The Jacobites advanced on the left flank of the government troops but were subjected to volleys of musket fire and the artillery which had switched from roundshot to grapeshot.

Despite this many Jacobites reached the government lines and, for the first time, a battle was decided by a direct clash between charging Highlanders and formed redcoats equipped with muskets and socket bayonets. The brunt of the Jacobite impact was taken by just two government regiments – Barrell’s 4th Foot and Dejean’s 37th Foot. Barrell’s regiment lost 17 and suffered 108 wounded, out of a total of 373 officers and men. Dejean’s lost 14 and had 68 wounded, with this unit’s left wing taking a disproportionately higher number of casualties. Barrell’s regiment temporarily lost one of its two colours. Major-General Huske, who was in command of the government’s second line, quickly organised the counter-attack. Huske ordered forward all of Lord Sempill’s Fourth Brigade which had a combined total of 1,078 men (Sempill’s 25th Foot, Conway’s 59th Foot, and Wolfe’s 8th Foot). Also sent forward to plug the gap was Bligh’s 20th Foot, which took up position between Sempill’s 25th and Dejean’s 37th. Huske’s counter formed a five battalion strong horseshoe-shaped formation which trapped the Jacobite right wing on three sides.

Bayonet drill innovation said to have been developed to counter the “Highland charge”. Each soldier would thrust at the enemy on his right – rather than the one straight ahead – in order to bypass the targe of Highlanders.

Located on the Jacobite extreme left wing were the Macdonald regiments. Popular legend has it that these regiments refused to charge when ordered to do so, due to the perceived insult of being placed on the left wing.Even so, due to the skewing of the Jacobite front lines, the left wing had a further 200 metres (660 ft) of much boggier ground to cover than the right. When the Macdonalds charged, their progress was much slower than that of the rest of the Jacobite forces. Standing on the right of these regiments were the much smaller units of Chisholms and the combined unit of Macleans and Maclachlans. Every officer in the Chisholm unit was killed or wounded and Col. Lachlan Maclachlan, who led the combined unit of Macleans and Maclachlans, was gruesomely killed by a cannon shot. As the Macdonalds suffered casualties they began to give way. Immediately Cumberland then pressed the advantage, ordering two troops of Cobham’s 10th Dragoons to ride them down. The boggy ground however impeded the cavalry and they turned to engage the Irish Picquets whom Sullivan had brought up in an attempt to stabilise the deteriorating Jacobite left flank.

With the collapse of the left wing, Murray brought up the Royal Écossais and Kilmarnock’s Footguards who were still at this time unengaged. However, by the time they had been brought into position, the Jacobite army was in rout. The Royal Écossais exchanged musket fire with Campbell’s 21st and commenced an orderly retreat, moving along the Culwhiniac enclosure in order to shield themselves from artillery fire. Immediately the half battalion of Highland militia commanded by Captain Colin Campbell of Ballimore which had stood inside the enclosure ambushed the Royal Écossais. Hawley had previously left this Highland unit behind the enclosure, with orders to avoid contact with the Jacobites, to limit any chance of a friendly fire incident. In the encounter, Campbell of Ballimore was killed along with five of his men. The result was that the Royal Écossais and Kilmarnock’s Footguards were forced out into the open moor and were rushed at by three squadrons of Kerr’s 11th Dragoons. The fleeing Jacobites must have put up a fight for Kerr’s 11th recorded at least 16 horses killed during the entirety of the battle. The Irish picquets bravely covered the Highlanders’ retreat from the battlefield and prevented a massacre. This action cost half of the 100 casualties suffered in the battle. The Royal Écossais appear to have retired from the field in two wings. One part of the regiment surrendered upon the field after suffering 50 killed or wounded, but their colours were not taken and a large number retired from the field with the Jacobite Lowland regiments.

This stand by the Royal Écossais may have given Charles Edward Stuart the time to make his escape. At the time when the Macdonald regiments were crumbling and fleeing the field, Stuart seems to have been rallying Perth’s and Glenbuchat’s regiments when O’Sullivan rode up to Captain Shea who commanded Stuart’s bodyguard: “Yu see all is going to pot. Yu can be of no great succour, so before a general deroute wch will soon be, Seize upon the Prince & take him off …”. Shea then led Stuart from the field along with Perth’s and Glenbuchat’s regiments. From this point on the fleeing Jacobite forces were split into two groups: the Lowland regiments retired in order southwards, making their way to Ruthven Barracks; the Highland regiments, however, were cut off by the government cavalry and forced to retreat down the road to Inverness. The result was that they were a perfect target for the government dragoons. Major-general Humphrey Bland led the charge against the fleeing Highlanders, giving “Quarter to None but about Fifty French Officers and Soldiers He picked up in his Pursuit”.

Jacobite casualties are estimated at 1,500–2,000 killed or wounded. As to prisoners, Lord Cumberland’s official list of prisoners taken includes 154 Jacobites and 222 “French” prisoners (men from the ‘foreign units’ in the French service). Added to the official list of those apprehended were 172 of the Earl of Cromartie’s men, captured after a brief engagement the day before near Littleferry.

In striking contrast to the Jacobite losses, the government losses were 50 dead and 259 wounded. However, a large proportion of those recorded as wounded are likely to have died of their wounds. (For example, only 29 out of 104 wounded from Barrell’s 4th Foot survived to claim pensions. All 6 of the artillerymen recorded as wounded died.) Moreover, recent geophysical studies on the government burial pit suggest the figure for deaths may have been nearer 300.