You are at:Home»Archives»Sir Walter Scott 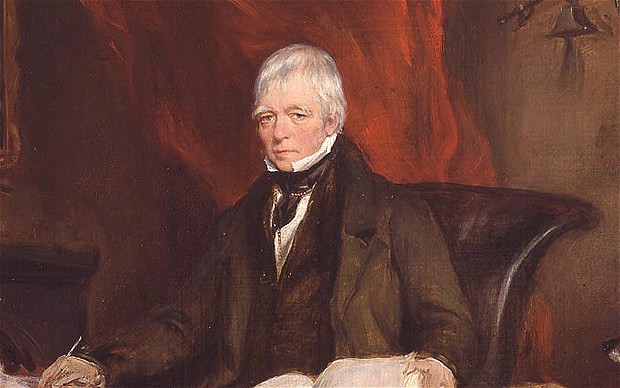 An extract from the notes of Alexander Carmichael (1832 -1912) regarding Sir Walters Scott’s visit in Appin. Between notes about his own family and general genealogical notes about the Carmichaels, Alexander Carmichael wrote down an anecdote regarding the time that Sir Walter Scott (1771-1832) visited Appin.

The date of Scott’s visit is not known but it must have been prior to the publication of his first historical novel Waverley which took the literary world by storm in 1814. Scott may be given credit for the creation of the modern historical novel and some of his writings, such as Rob Roy (1817), were deeply influenced by Highland history.

It must be said that Scott’s views of the Highlands were not detached from romanticism, such was the lingering influence of James Macpherson’s Ossian, but at the beginning of the nineteenth century his writings proved to be immensely popular.

This anecdote begins with two Appin men who may have been escaping from Culloden, before the connection is then made with Sir Walter Scott.

Maccoll and a Carmichael were pursued by horsemen and wishing to preserve their swords they drove them into the moss over which they were pursued. They were imprisoned in Castle Stalker Appin and when liberated they went back in search of their swords and found them. When Sir Walter Scott was in Appin he taught Archibald the son of this Maccoll the rudiments of English [and]Latin grammar along with the boys of his host Stewart of Invernaoile. It was here that Scott heard mostly from the miller of Inverfolla adjoining the episodes of the 45-46 woven into the web of Waverly.

He took jottings in house a bit of which is still up and used as a milk-house and then went to a cave up the hill side and then extended his notes. This was his habit and when at a subsequent period when he became famous Scott visited Appin he went to see the cave by the river on the hillside where as he pathetically said he spent some of his happiest hours. This cave is notable from its having been the place where his muime hid Domhnull nan Ord Donald the Hammerer when an infant The history of Donald the Hammerer is given by Sir Walter Scott in Jamieson’s edition of Burts Letters from the Highlands.