You are at:Home»Archives»Port Appin School 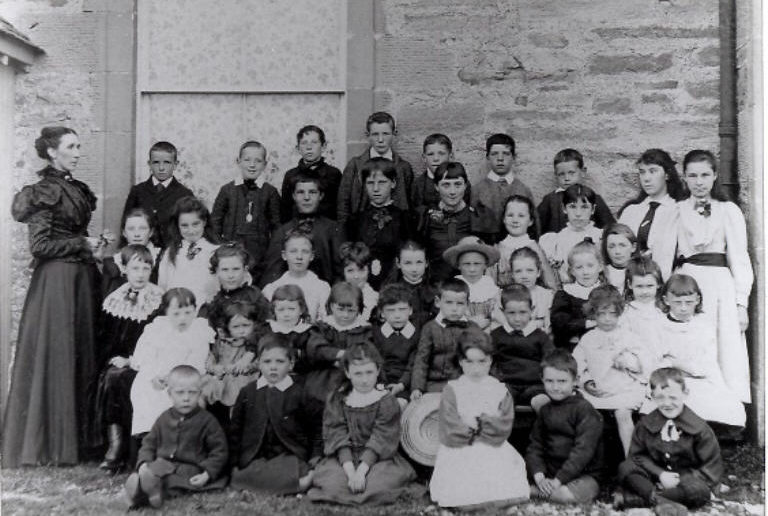 Janet Ann MacGlashan, was born in Dundee in 1847, the daughter of James and Janet. Her father was a grocer and spirit dealer in the 1840’s and later became a gardener. Janet Ann, known as Annie had an older sister, Elizabeth and a younger brother James.

Annie was the first to leave home and studied in education. At the age of 24 she was teaching and boarding in the district of St. Giles, Edinburgh. By 1881, she was Schoolmistress of Lochcarron School. During the same period, her parents moved to Port Appin, living at Airds, in the Gardeners House, under the employment of the MacFie’s.

Janet MacGlashan, (Annie’s mother) died in 1887 in the Gardeners House. Annie moved to Port Appin and lived with her father, to ‘keep house’. She also, accepted the new position of employment at the newly built Port Appin School.

At the age of 43, Miss MacGlashan opened Port Appin School in November 1890, with an attendance roll of 22 scholars. She taught the Standards 1-4 of the school curriculum and when the older pupils had obtained this level of education, by means of qualifying exams, they were transferred to Strath of Appin Public School.

The School building was also used as a church and services were conducted by the Free Church minister, the Rev. Ross. The six O’clock service was always well congregated, with the chance of not obtaining your usual seat, if not there early enough in the evening! The church services ran throughout the life span of Port Appin School only stopping with the close of the school in 1975.

The Ministers, Doctor, Mrs MacFie and various school board members regularly visited the school. Mrs MacFie would hear the children sing or read, while the board members, such as Dr Archibald MacKay (Airds Hotel), Angus Black, Duncan MacMurchy, Rev. William Torrie (minister of Lismore) and Neil MacCormick, would make assessments on the general running of the school. The ministers would also examine the children on Scripture Knowledge.

Miss MacGlashan, was an asthmatic and didn’t keep well. At times Miss Rae from the infant department at Strath of Appin School would cover for her. Also some of the ‘advanced pupils’ of Appin School would ‘keep class’, during her absence. Flossy MacIntyre was one of those pupils, a former pupil of Port Appin School, who advanced to the senior class at Appin. Flossy was the daughter of the local Registrar at Linnihe House, and her sister, Annie, later became the permanent school teacher of Port Appin School.

Even when the school building was relatively new, it was found to be extremely cold. Often during the winter months the school would be closed early, even recording that the children’s hands were too cold to hold needles during sewing lessons. Brocken windows during the period of January 1895 added to their discomfort.

By 1898, the school roll reached 41, including two Gaelic speaking girls from Sheep Island. However Miss MacGlashan was particularly ill during the winter of 1897/98 and Sarah MacFadyen, late of Appin School taught during her illness.

In June 1900, James, the father of Annie MacGlashan also died at the Gardeners House, Port Appin. The following year, in May, she moved out and into the School House. Annie was the only school teacher to ever use the school house for its intended purpose.

Very few pupils had suitable footwear for school and more often no shoes/boots were worn at all. This was reflected in her attendance register, as she had numerous entries relating to sore, cut or blistered feet; boys and girls. Even the shoemakers children attended school, in the summer, barefooted.

At the age of 64 Miss MacGlashan retired from Port Appin School, in May 1911. She was well respected by everyone who knew.

She remained in Port Appin and died on 6th March 1920.