You are at:Home»Archives»Christina Anne MacLachlan 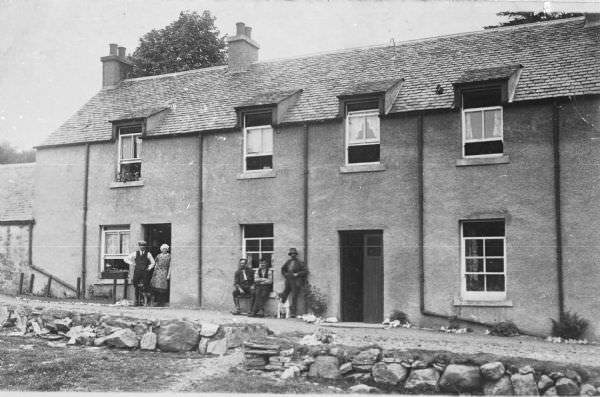 Christina Anne was born in Fort William, daughter of John MacLachlan and Flora Boyd and resided at the High Street. Her father was a flesher and baker and both parents native to the area of Kilmallie. Christina was born in 1873 and had fours siblings; Ewen, Duncan, Malcolm and Donald.

This was to became a most unfortunate and tragic family. By 1925 only one family member remained.

Tragedy first struck at about 2 o’clock in the afternoon of June 23rd 1879 with the drowning of four year old Malcolm while playing with companions on the Long Bank, a favourite spot when the tide was out. The boat referred to in the published account was the Iona.

“FORT WILLIAM – SAD CASE OF DROWNING – On Tuesday, a little boy about five years old, the son of John McLachlan, flesher, was drowned in Loch Linnhe. The child, along with some other young children, was wading in the Loch, when the afternoon boat passed. The wash from the paddles reached him entirely out of sight of the boat, and carried him off his feet. The other children were too young to give immediate alarm, and before the body was recovered, some time had elapsed. Dr Kennedy was called, but after unwearied exertions for many hours, had to desist without succeeding in restoring animation; though several times there seemed to be good reason to hope that his
efforts were to be rewarded with success. Much sympathy is felt with the parents.”

The following year tragedy struck again with the death of Flora who died in childbirth while delivering her fifth child, Donald. As a consequence, he and his sister, Christina Ann were taken in by their grandparents, Malcolm and Christina Boyd at Achnacone. Ewen, the eldest child, and Duncan stayed in Fort William, at first with their father
and then latterly with an uncle.

Though the children’s father remarried, Christina Ann and Donald McLachlan remained at Achnacone, attending
school at Strath of Appin. Just six years after the death of their mother, their father contracted TB and died in
the year of 1886.

In the same year, Christina was also diagnosed with TB. After a yearlong suffering from the illness, she died at Achnacone Farm House, on 20th May 1887, at the age of just 15. The day of her burial, on 24th May, Strath of Appin School closed for the afternoon, to allow the pupils to attend. The school marked down the absence of the pupils as a half day holiday.

TB continued to plague the family, with the death of Christina’s eldest brother Ewen, in 1896. He had never moved from Fort William and had become a letter carrier. He died in 1896 aged 24 and unmarried. Donald, Christina’s youngest sibling, also succumbed to a relatively early death. Having moved to Taraphocan in Appin where he lived with his three unmarried uncles, he died of heart disease in 1925 at the age of 45. He also was unmarried.

Christina’s remaining sibling, Duncan, had seen the early death of both his parents, his three brothers and
his only sister. He trained as an apprentice law clerk and became a Fort William and Glasgow solicitor.
He married Joan MacAulay at Inverness in 1935 and moved to Lochmaddy, North Uist, where he retired. Duncan died in 1945 at the age of 70.

Flora Boyd’s parents, Malcolm Boyd and Christina Cameron both hailed from Ardgour, leaving Callop for a larger farm at Gortenfern on the Ardnamurchan. Between 1871 and 1881 they took over Achnacone where they farmed 1,000 acres at £360 annual rent before retiring to Ardroinnich House, Ardchattan and then on to Ballymeanach, Mull. Christina died in 1891, Malcolm in 1892, both were interred in the ancient burial ground of Cille Mhaodain in Ardgour, next to Malcolm’s own grandfather, also named Malcolm Boyd, who died in 1803.

In loving memory of

Dugald Cameron, named on the inscription was Flora’s sister; Hughina’s son who died from blood poisoning at the age of ten.

John Boyd, also on the memorial inscription, farmed Taraphocain in equal partnership with his two brothers, Dugald and James, all three remained unmarried. James died at Ardchattan in 1930, Dugald at Oban in 1939.

Flora’s youngest son, Donald McLachlan, as we have seen, worked on the farm for his three un-married uncles. He died of heart disease at Taraphocain in 1925.

Of Flora’s three sisters, Margaret Boyd married Robert McNab, a gardener, and lived at Lochgilphead.
She predeceased him, dying in 1910 at Dunoon aged 48. Hughina Boyd married Donald Cameron, a
farmer; they lived at Glenmore, Ardnamurchan. Johanna Boyd married Donald McLachlan, (no relation to her brother in
law, John McLachlan.) They farmed at Corrybeg on the northern shore of Loch Eil before moving
to Kilbride farm, Kilmore where she died in 1919 aged 68.

Frances Knight and Appin of Yesteryear