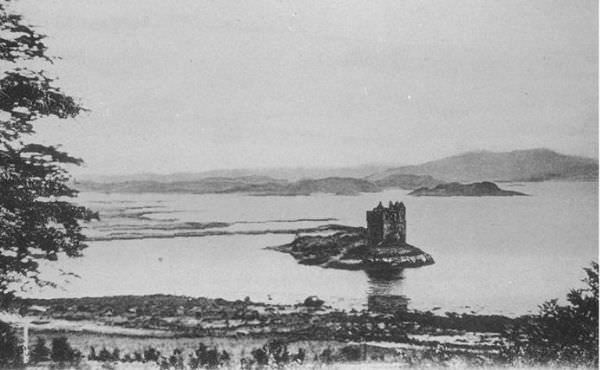 A. Donald MacKenzie born at Blarchasgaig, Strath of Appin, Argyleshire, on the 24th of November 1836.

About 1745 there must have been a considerable number of MacKenzies in the Strath of Appin, thirteen of them followed the Stuarts of Appin in the rising of that year in support of the Stuart Cause. There was a legend amongst them that they were descended from on e McKenzie who lived in a very lonely spot near the top of Glencreran on the south side, called “Barr-na-Muic,” which means the point, promontory, or hill of the sow. Probably this ancestor fled from Ross-shire, the county of the Clan, on account of his misdeeds, and from fear of vengeance. Highland history, like all histories of early times, reeks of tales of slaughter, blood feuds, and appalling treachery.

My father, Alexander MacKenzie, was born at Ledgrianach, a small farm about half a mile north of North Shian on the road to Tighanrippie, about the year 1770, and died at Drumnamoine when he was about 78 years of age. He was a man of middle height, probably about 5ft. 7 ins., and broad in the face with blue eyes and brown hair. He was a good English and Gaelic scholar, and had some knowledge of Latin. For his station in life he was of more than ordinary intelligence; possessed a considerable number of books, mostly historical; and was well up in history, ancient and modern. He was a keen reader, and, I think, a Freemason. He was a weaver to trade, also occupied and worked a croft, and he was for some time beadle and bellman at the Parish Church.

Alexander MacKenzie was the son of John MacKenzie, at one time coachman to Sir John Campbell of Airds. I believe he was born at Muckairn, but was of the Colony of Strath of Appin MacKenzies.

The wife of John MacKenzie was Ann Campbell, formerly lady’s maid to Lady Campbell of Airds.

Their family, as far as I can remember, were Donald, born in 1775; Mary, Alexander, Nicol, John, Isabella, Ann, and Margaret. The family seem to have removed from Ledgrianach to Ardtur, near Stalker Castle, about 1787. The farmhouse was on the south east side of the peninsula of Ardtur, opposite the United Free Church Manse. I remember the ruins of the house and steading.

My grandfather, John MacKenzie, died at Ardtur, when my father was about 14 years old – that would be about 1795; his age would be about 50 years. My grandmother did not live long after him. She was the daughter of Donald Campbell and Ann McNiven, who lived at Glaicheriska, Ann McNiven, after her husband’s death, lived in a cottage at “Gortan-an-leithed,” near Drumneil, on the road from Port Appin to Shian. I never heard much about my great grandfather, Donald Campbell, who must have died comparatively young, but I heard a great deal about Ann McNiven, my great-grandmother. She died in my father’s house, where I was born, at the great age of 103, and I was told she walked to the church, about a mile distant, six weeks before her death. This Ann McNiven must have been a remarkable woman in her day and generation. She was married when 16 years of age, and was left a widow when she was 40. She thus lived a widow sixty-three years. It was the custom in the Highlands at that time when a person died, for the neighbours to gather at the house of mourning and convert it into a house of feasting and rioting, playing of fiddles and dancing, and, to add to the barbarity of the custom, the nearest relative to the deceased had to take part in the first reel. When the neighbours, according to custom, gathered to Ann McNiven’s house on the death of her husband Donald Campbell, she barricaded the door and the windows, and would allow no one to enter the house. I was told this was the beginning of the breaking down of this relic of barbarism, which died out before my time, though a phase of it continued in the shape of people sitting up with lighted candles and drinking whisky whenever there was a dead body in a house, something of the same nature as the Irish “Wakes,” which I understand are celebrated in Ireland to this day.

Old people whom I met when a boy, and who knew Ann McNiven (she was always referred to by her maiden name) spoke of her with the greatest admiration, as a woman of ore than ordinary intelligence and character. I am not sure of the date of her death, but it was probably about 1815.

Of my father’s brothers and sisters I don’t know much.

Donald lived for some time on a croft on the other side of the road opposite the present parish church. I remember the house quite well, but he seems to have left there and gone to the Isle of Skye when I was quite young. His family, a son and three daughters went to Australia about 1852, and I never heard any more of them.

Mary, my father’s oldest sister, married a man McMillan, a shepherd; they lived in Lochaber. She used to walk to the Strath of Appin to visit my father regularly, when she was over 70 years of age; the distance was about twenty-five miles. I remember her as a very tall, strong old woman. The last I heard of any of her family was about fifty years ago, when I understand one of them was a stationmaster in Dumfriesshire.

Nicol MacKenzie was drowned by the capsizing of a small sailing boat at Corran of Ardgour on the eve of his marriage.

John MacKenzie settled in Ross-shire. Some of his descendants are still there.

Isabella married a man MacDonald, a Skyeman. Some of their children went to Australia with Donald’s family.

Ann married a MacCorquodale in Lismore. I think some of her grandchildren are there still.

Margaret died in Glasgow about 1850. She lived for some time until her death with my brother John.

My mother was Margaret Paterson, born in 1800, and died in Glasgow when she was 80 years of age. She was buried in Appin Churchyard. My mother was a woman of uncommon wit, and highly intelligent. In person she was more than the average height, and stoutly built. her father was Lachlan Paterson. He carried on a small brewery at Rhugarve, between Shian and Ardnaclach, but removed to a small farm at Ardnaclach, where my mother was born. Lachlan Paterson was a native of Mid Lorn. My mother’s mother was a Campbell. I am not sure of her first name. There were a number of Campbells about Ardnaclach. I understand they were descended from a man Campbell from Lismore who accompanied a Campbell lady from Achanuaran when she married a Stewart of Invernahyle. He was a sort of bodyguard, there being a standing feud for centuries between the Campbells and the Stewarts.

My mother’s brothers and sisters were:

Mary, who died at Portnacroish about forty years ago. She was nearly 90 years of age. Her husband was Laurin MacLaren. Their only child was Lachlan MacLaren, who lived at Lismore, Co. Waterford, Ireland, and died there suddenly quite a young man.

John Paterson, a brother, died about 1851 leaving one daughter, who died at Paisley.

Archibald Paterson married to one of the MacKenzies of Taraphocain, Glencreran. His son was Lachlan Paterson, draper, Greenock.